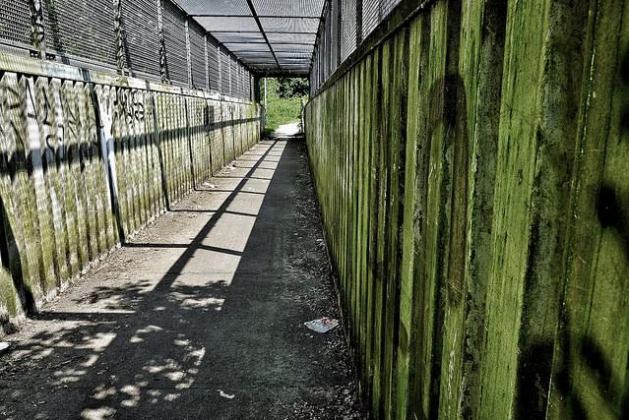 The wall had been the source of bloodshed and anger between the two nations for years.

It had split families apart on either side.

It had been witness to umpteen deaths, destruction and unprovoked firing resulting in a high number of casualties in different incidents.

The people on either side of the wall had different beliefs, virtues and principles so much so that the two nations were as different as chalk and cheese in their foreign policy matters, economy and global standing.

The Korean wall was successful in splitting the North and South at both a physical and people-to-people level.

Written for the photo prompt and you can read the other entries here.

She was thankful to be alive..

“It’s difficult to even imagine the gamut of emotions she must be going through.”

Linda was on the way to meet her parents when her plane plunged towards the ocean at a rate of knots. She distinctly remembered the screams and cries for help ringing out and about the cabin only to black out when things unravelled.

While she was thankful to be alive, she was reminded of the screams and cries of the others every night. She always wondered what God had in mind for her for keeping her alive amidst such a horrific tragedy.

I am participating in the A to Z challenge in April  and the theme I have chosen is Micro-fiction.

Why isn’t compassion given the importance it deserves? #1000Speak

In My thots and scribbles, Social Causes, Uncategorized

Our newspapers, social media, TV channels, conversations among friends and more are almost always filled with negative stories of any kind from violence in any form to deaths. It’s like discussing about negativity is something which people survive on in today’s world. But is the world really that negative? Or are our thoughts shaped by what we read or hear?

Violence in any form has increased over the years. People are ready to kill each other for money, religion, love and every reason you could possibly think of. Disasters of every kind lead to deaths of thousands of people each day. While these acts may still be few and far in between, the human mind starts to remember each of them as he or she is fed with information on such acts day in and day out.

END_OF_DOCUMENT_TOKEN_TO_BE_REPLACED

“How can you even think of taking a bath when we don’t even have enough drinking water?”

They were facing the worst drought in decades. With destroyed crops and deaths due to excessive thirst, the drought had started to affect daily lives. There was water all around the island but not a drop to drink.

I love old movies and I also love Netflix streaming. Thankfully, I can have the best of both worlds as Netflix continues to offer up more and more classic films for me to stream to my laptop or game console. One of my favorite classic comedy/mystery series is called Charlie Chan.

The main character in the Charlie Chan movie series is an Asian-American detective from Hawaii played by Sidney Toler. He is like Sherlock Holmes and can solve even the most difficult cases. In the film, ‘The Chinese Cat’, he teams up with his ‘number three son’ ‘Tommy’ (Benson Fong) and the African-American taxi driver ‘Birmingham Brown’ (Mantan Moreland) to solve a six month old murder case and two other mysterious deaths.

As the three travel through a funhouse they uncover the sinister plot behind the murders and solve a jewellery heist along the way. Full of humor and action, this flick and the others in the series are well worth watching.

END_OF_DOCUMENT_TOKEN_TO_BE_REPLACED

26/11 at Taj vs AMRI hospital at Kolkata – How are they similar but different?

In My thots and scribbles, Uncategorized

When an Indian is reminded about the date – 26/11, all he can think of is terror, bomb blasts, attacks, death, blood, gore, disaster everything that could spoil the happiness of a human being. It is synonymous with one of the worst periods of our times when everyone across the nation especially Mumbai and the Taj had to go through hours of hell. On the other hand, the AMRI hospital tragedy today at Kolkata is another addition to the growing list of incidents which makes you think that human life in this country has no value at all.

But why am I linking the two incidents as different as chalk and cheese? An incident which was the result of a terrorist attack and another which was due to a fire can be related? Am I out of my mind? Is it my opinionated mind at work? Whatever you think, there is a small similarity but a small difference!!